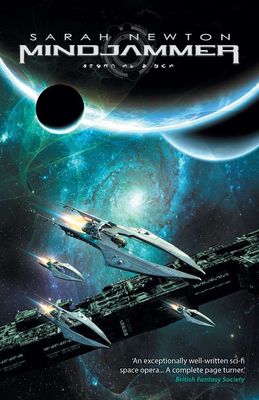 In the seventeenth millennium, the New Commonality of Humankind is expanding, using newly-discovered faster-than-light travel to rediscover lost worlds colonised in the distant past. It's a time of turmoil, of clashing cultures, as civilisations shudder and collapse before the might of a benevolent empire ten millennia old.

In the Solenine Cluster, things are going from bad to worse, as hyper-advanced technologies destabilise a world in chaos. Thaddeus Clay and his SCI Force special ops team are on the trail of the Transmigration Heresy. What they find is something beyond even their imagining - something which could tear the whole Commonality apart…

“A sophisticated extrapolation of current tech, with a thoughtful background and plenty of rollicking adventure."
- Jaine Fenn, author of the Hidden Empire series
“An exciting, intelligent read, well worth a look."
- British Science-Fiction Association Vector Magazine

"Thrilling adventure and mystery wrapped up with an inventive, mind-bending look at mankind's future."
- Howard Andrew Jones, author of The Desert of Souls

"Complex, gripping... the most original sci-fi you're likely to get..."
- G*M*S Magazine

"a very exciting and intelligently-written novel that should be on the reading list of every SF fan!"
- Stargazer's World

"William Gibson-like in the intensity of the ideas it introduces... a heady mixture of action, crunchy science fiction elements and that perennial cyberpunk or transhuman question: what does human mean?"
- Shores of Night
This product is a fiction novel for the Mindjammer setting. The digital version contains PDF, EPUB, and MOBI (Kindle) versions of the novel.
*****

Get the Mindjammer RPG - you can purchase both novel and RPG as a bundle!