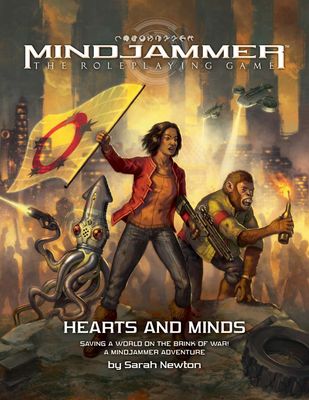 Mindjammer - Hearts and Minds – Saving a World on the Brink of War!

“One hundred years ago no one had even heard of aliens. Then the sightings began — uncanny lights by the Snow-Layer, anomalies on our radar, strange reports from lone farmers or the pithecines in the backwoods. Some people thought it was the brave explorers of legend, returned from fabled Homeworld to help us in our hour of need; others thought it was the precursor to an invasion by an alien race, with designs on the fertile lands of our cratered home.
“Twenty years ago they announced themselves — and it was both. The Homeworlders had come, in force, and were nothing like our myths foretold. Heedless of our ways, they swept in like a whirlwind, and it seemed there was nothing we could do to stop them.
“They called themselves The Commonality...”

The world of Olkennedy is on the brink of civil war. Deadly factions with nefarious agendas conspire for power in a society reeling from culture shock, and your characters are the only thing holding back a bloody conflict which will tear the planet apart!

- A whole rediscovered world — maps, biosphere, civilisation, and society;
- A thrilling multi-session scenario of conflict, investigation, and intrigue against the backdrop of developing civil war;
- Details of Commonality factions;
- Guidelines for convention and one-shot play;
- An action-packed scenario for Mindjammer — The Roleplaying Game. The Mindjammer — The Roleplaying Game core book is required for play.

Mindjammer. It is the Second Age of Space — the transhuman adventure is just beginning!

An Adventure for Mindjammer - The Roleplaying Game:

Grab your blaster, thoughtcast your orders to the starship sentience, and fire up the planing engines — come and defend the light of humanity’s greatest civilisation as it spreads to the stars!

500 pages containing all the rules needed to play, including:

Mindjammer — The Roleplaying Game can be used to play in the New Commonality of Humankind, or as a complete and detailed transhuman space opera rules set for any science-fiction setting.

It’s the Second Age of Space — the transhuman adventure is just beginning!

“It’s transhumanist space opera with a twist. Usually in transhumanist settings transfer of personalities is a common theme and the transferred mind is still considered to be the person it was before. This is different in Mindjammer and it makes the game much more playable in my opinion. The setting is definitely what makes the game a must-have for SF fans. It’s unique, extremely detailed, and should be a lot of fun to play.”

“Overall I have to say – “wow.” This is an epic piece of work… The scope and breadth is magnificent and the little personal details in each chapter make this a joy to read through. … The fact that the system uses Fate Core I find intriguing. In fact so much so that I will be placing my order forthwith! To be honest the price of $54.99 for a 500-page book and PDF I think is a bargain. This gets a hearty endorsement from UK Roleplaying. Grab your blasters and let’s all head for the stars!!”

– Review at the UK Roleplaying blog.

“[Mindjammer] does damn near anything you might want it to do for a sci-fi campaign. Gracefully. With style. And in a way that’s fun for GM and players alike… From a layout and design standpoint, the book is stunning… If you’ve ever pondered running a FATE-based space campaign, I don’t think you’ll find a deeper resource of ready-to-use information than the Mindjammer book.”

– Review of Mindjammer at The Game Knight Reviews.

“Mind-blowing… A Fate Core powered sci-fi RPG that feels larger than space istelf – and given there’s the Mindscape to explore, use, master and worry about, in addition to physical space, perhaps it really is that large. Mindjammer: The Roleplaying Game is a transhuman epic.”

– Review at the Geek Native website, by Andrew Girdwood

“Mindjammer is a great stand alone science fiction roleplaying game. Building on and adapting Fate Core to SF, you are propelled into a transhuman time of expansion, exploration and danger. Tools are provided to guide you on campaigns, adventures and constructing everything from characters to cultures, vehicles to huge structures. Really, very good indeed!”