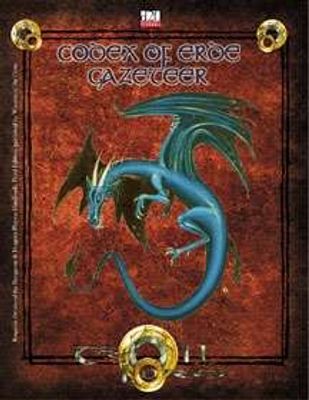 Add to wishlist Remove from wishlist
Digital : $1.99 at DriveThruRPG

Explore the world of Erde, where epic and heroic adventure abound.

The Codex of Erde Gazetteer is a 36 page introductory booklet for the world of Erde Campaign setting developed by Troll Lord Games. The Gazetteer offers everything a DM or player needs to begin running games in the World of Erde. Within you will find:

A brief history of the world of Erde with enough depth to give an immense understanding of the world, its history, the impact the Winter Dark Wars and the Horned God's lasting influence.

A cosmology of Erde with maps and diagrams of the world's relation to the planes and the mult-iverse as well as more insight into the mythology of Erde's creation. Most of this section is new and does not appear in the Codex of Erde.

The races and languages of Erde details the nuances of race in Erde as well as the literacy skill that caused such controversy in the Codex of Erde!

The gods of Erde and common Guilds and Orders cover all you'll need to know about the cultural of the regions of the world. Some you'll recognize, others will be a far cry from what you expect.

There are also complete country descriptions, with over 30 kingdoms covered as well as significant terrain features from mountains, hills and forests, to the seas and rivers.